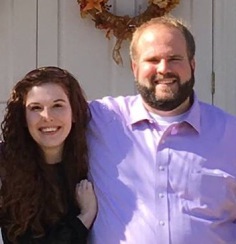 Jeremy, his bride Amber, and their dog Lovie moved to the Bayou in September of 2015.  He is originally from Arab, Alabama, and served as Student Minister at Arab First Baptist Church for over 13 years before the Lord called him and his bride to move south to serve as our pastor.  Jeremy graduated with a Bachelor of Arts in Religion from Samford University in 2001 and a Masters of Divinity from New Orleans Baptist Theological Seminary in 2008. He loves Alabama and Chicago Bears football.

Amber is originally from Athens, Alabama, and is currently working for Mobile County Schools as School Improvement Specialist.